Condrieu lookalike back in stock

I have just received my allocation of 2019 Domaine de Vedilhan Serica Viognier and as always availability is limited. For those of you that do not know this wine it is one of the best value whites on the market. It is produced on a small Domaine in the southern France which has a micro-climate similar to northern Rhone. The Serica (which is Latin for silk) is 100% Viognier and two thirds of the wine is fermented in French oak and creates a wine of wonderful texture and richness. This is the same grape and production technique used for Condrieu, the great white wine of northern Rhone. The difference being that where it’s pretty hard to find any Condrieu under £30, the Serica manages to slip in under £10 – quite staggering considering the quality. If you like rich white wines then secure a case or two of this now as it’s never around for long.

Those of you that enjoy a lighter style of red will really enjoy this wonderful Dolcetto d’Alba from Piemonte in northern Italy. From a region famed for its more structured reds like Barolo, Barbaresco and Barbera, Dolcetto has a lovely red fruit style not too dissimilar to Beaujolais or Loire Cabernet Franc. This had a super fresh character as soon as I poured it with nice youthful black and red berry fruit. However the longer it was open it offered more herbaceous and savoury notes and added a little more weight. So yes, a great lighter red but with some structure too and well worth a look for the warmer evenings (when they return!). The producer Bel Colle is also a much respected producer of Barolo and Barbaresco and, although uncertified, practices biodynamic viticulture.

It’s been out of stock for a few weeks now but 2019 Aristocratico Appassimento from Salento has returned. This is the wine known as the ‘baby Amarone’ as it is produced using the same method of drying the grapes in the sun (known as Appassimento) to increase the richness of the wine. The result is a wine that’s ripe and pronounced on the nose, showing aromas of baked plum, fig and dried fruits. Full and rich on the palate with velvety texture and plenty of sweet dried fruit. Great depth and richness which is perfectly balanced with a dry finish that makes this wine incredibly moreish. 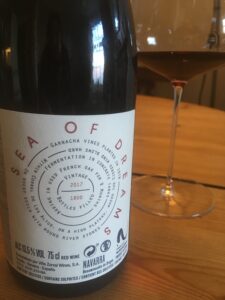 Dreams are made of this old vine Garnacha from Navarra

I’d just like to bring your attention to a wine I really enjoyed over the weekend. A recent addition to the portfolio, 2018 Sea of Dreams old vine Garnacha is drinking beautifully. It has such a lovely silkiness it is like a Burgundy in texture. Sometimes Garnacha/Grenache can be pigeonholed as a powerhouse but this […]